MySQL Ndb Cluster provides durability for data by default via logging and checkpointing.

In addition, users can take backups at any time, which allows for disaster recovery, replication synchronisation, data portability and other use cases.

This post looks at the backup and restore mechanisms in MySQL Ndb Cluster.

MySQL Ndb Cluster is a superset of the MySQL Server functionality, and users may use a mix of Ndb and InnoDB tables and features.

MySQL Ndb Cluster has a built-in backup mechanism called Ndb backup.  Ndb backup captures the state of all of the tables and indexes stored in the cluster data nodes, allowing them to be restored to a transactionally consistent point in time.  As this data is partitioned and distributed across the cluster data nodes, the backup is also partitioned and distributed, with each data node producing a standalone set of backup filesets containing a subset of the cluster's data.  Restoring all of the backup filesets results in restoring all of the cluster's data. 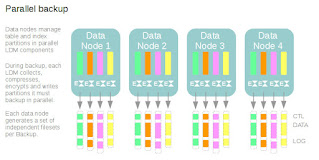 Ndb backup filesets are restored using a tool called ndb_restore.  This tool can read the filesets generated by Ndb backup, and uses NdbApi to efficiently restore the data to a target cluster.  The backup files contain a logical rather than physical format - restoration is effectively re-insertion and modification of rows. 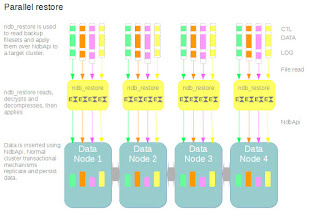 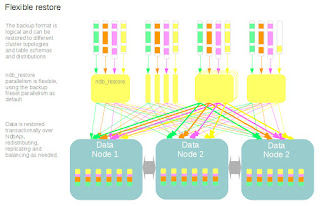 As the backup is partitioned into logical shared-nothing filesets, the restore is also naturally partitioned and parallelised for minimal restoration time.

Note that Ndb Backup captures only the data stored in the data nodes, e.g. tables with ENGINE=NDB[CLUSTER].  InnoDB tables and indices, and other MySQL Server local objects such as Triggers, Stored procedures and Views must be backed up and restored using different mechanisms such as mysqldump.

Each Ndb Backup captures the state of a cluster at a transactionally consistent point in time, represented in Ndb as an epoch number.  Epoch numbers are also used in MySQL Ndb Cluster as transactional Binary log markers, dividing the parallel flow of committed transactions into consistent units.  This transactional alignment between backups and binary logs makes it easy to setup and manage async replication between clusters, and implement point in time recovery solutions.  The binlog position corresponding to a backup can be precisely determined, and replication can be established from that point onwards.

All constraints are naturally checked as part of the constraint rebuild, so integrity is enforced.

Ndb backup filesets capture the schema of tables and indices.  ndb_restore uses this information to recreate tables and indexes prior to restoring data.

When restoring data, ndb_restore compares the schema of tables and indexes in the target cluster to those captured in the backup.  ndb_restore optionally allows a number of differences, e.g. in numbers of columns, type widths etc, so that data captured from an old schema version can be restored into a new schema without intermediate transformation steps.

Recent versions have added support for column remapping, where data can be transformed, and changes to the set of primary key columns, allowing distribution optimisations.

These features can be used alongside the schema flexibility features of MySQL asynchronous replication, allowing replication to be established and synchronised from an old schema cluster to a new schema cluster, and vice-versa.

Ndb backup filesets can optionally be compressed using a parameter in the cluster configuration.  Compression is performed by background IO threads in the data node processes, prior to writing data to disk.  ndb_restore handles compressed backups automatically during restoration.

From the 8.0.22 release, Ndb backup filesets can be encrypted.  Backup encryption provides protection for data which must leave the cluster security perimeter, and combines with e.g. MySQL Binlog encryption to help implement a secure async replication mechanism.  Backup encryption occurs in background IO threads in the data node processes.

Backups are encrypted and decrypted using a user supplied password.  For each file in each backup fileset, a unique random salt value is generated, and combined with the password via a key derivation function to generate a symmetric encryption key for that file.  The key is then used to encrypt the backup data using AES 256 CBC inline.  For restoration, ndb_restore combines the user supplied password with the per-file salt values to determine the unique decryption key for each file.

Using an external password in this way allows users to manage backup encryption secrets in alignment with existing policies and systems.

In the 8.0.20 release, the ability to use multiple ndb_restore instances to restore slices of a single backup fileset was added.

Users trigger a new Ndb backup using the management api (ndb_mgm / mgmapi).  The command in the ndb_mgm shell (version 8.0.22) looks like this :

The backup id affects the name of the backup files on disk.  If no backup id is supplied, then the cluster generates one internally.

If an encryption password is supplied, then the generated backup files will be encrypted using this password.  If the RequireEncryptedBackup parameter is set in the cluster configuration, then a password must always be supplied.

The NoWait, Wait Started and Wait Completed options affect when the START BACKUP command itself will return control to the user, with Wait Completed as the default.

The ndb_restore tool operates on one or more backup filesets generated by a node at backup time.  The main options are :

Options can be combined, so that a single ndb_restore invocation performs multiple actions.

All backup filesets redundantly contain the schema metadata, but the --restore-meta step need only be performed once.  This step will recreate the schema as it was at backup time, though in cases where the table distribution was not explicitly set, it will be automatically adjusted to suit the target cluster.

Where there are schema changes, or transformations applied, these are performed as data is restored.  One exception is where type changes convert to/from/between BLOB types - in this case ndb_restore automatically uses internal staging tables to perform the restore in two steps.

ndb_restore can be used to restore data from backup filesets while a cluster is in operation, with some caveats :

Some other relevant ndb_restore options :

The ndb_restore tool can also be used to show the content of backup filesets in various ways.

ndb_restore is a flexible tool.  Full cluster restoration normally follows a sequence like this.

For restoring a backup from a single data node cluster, with no schema changes, a single command can perform all of these steps in one pass :

However, it is more common that a backup has come from a multi node cluster, and requires a number of invocations of ndb_restore to fully restore.  This enables efficient parallel restore independent of cluster scale.